What Is a Multifold Hand Towel?

Multifold paper towels, or z-fold paper towels, are folded in 3 layers in the shape of an accordion. These towels are 1-ply, so they’re very economical, but they are often 9.2” x 9.4” when unfolded, making them larger and more absorbent than single fold paper towels. If wiping your hands on a towel seems unsanitary, using a multifold paper towel from a basket or dispenser allows you to grab a single sheet without touching or dripping water on the next one.

The Benefits of Multifold Hand Towels

Besides being a great economical option for your public bathrooms or office break rooms, you’ll notice many other benefits of multifold hand towels, such as:

Takes up less space due to narrower design

Rolls of paper towels are great on a paper towel rack, but otherwise they’re large and take up too much space. They usually come in bulky packages, and round objects are not easy to stack in a supply closet. Because of their narrow design, multifold hand towels come in bricks instead of rolls. Because of this compact design, you’ll also get more paper towels in one brick than you will in a roll. Some multifold paper hand towels come in bricks of 250 towels. Rolls usually only hold around 150 towels, depending on the brand.

Don’t you hate it when you go to grab just one paper towel from the roll and you end up ripping the next sheet? Or when you get paper towels from a dispenser and they all come out when you just needed one or two? Multifold hand towels aren’t connected to the towels around them, making it easy to grab one towel at a time.

Paper towel rolls usually come in big plastic bags, and then each roll of paper towels is also wrapped in plastic. That’s a lot of waste! Multifold paper towels are held together in bricks by a paper envelope similar to a toilet paper roll. These bricks are packaged in a cardboard box, making them easy to ship from any supplier. When you buy multifold hand towels, you won’t find any plastic in the packaging. All of the packaging is completely recyclable, which means less waste in your office.

If supply chain issues are keeping high-demand items like paper towels off the shelves, you might find yourself scrambling to restock. With A.G. Maas, we work directly with suppliers so we can make sure you are always in stock of what you need.

Work with A.G. Maas for regular supply deliveries. We’ll monitor your usage and predict when you’ll need to restock particular items. You’ll never have to worry about running out of particular items again when our frequent deliveries keep you in constant supply. Contact A.G. Maas today to learn more. 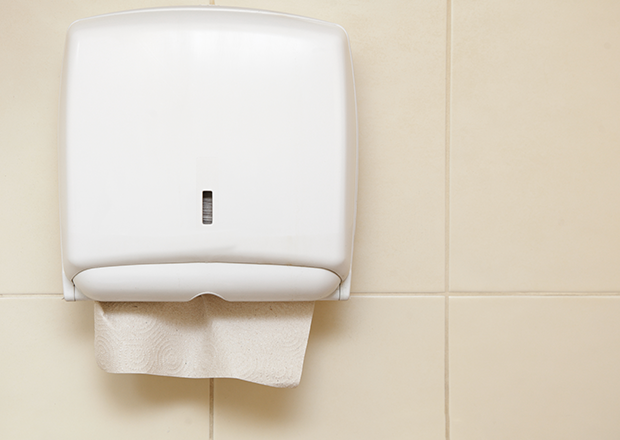 Whether its multifold hand towels, toilet paper, or any other bathroom supplies, A.G. Maas is your reliable source for all types of cleaning and janitorial supplies. If you are already signed up with a supply company, talk to A.G. Maas to see if we can offer you better pricing or higher quality items. Let’s work together to keep your business clean and professional. Call A.G. Maas today.

Keep up with the latest tips and special deals – subscribe to our monthly newsletter.